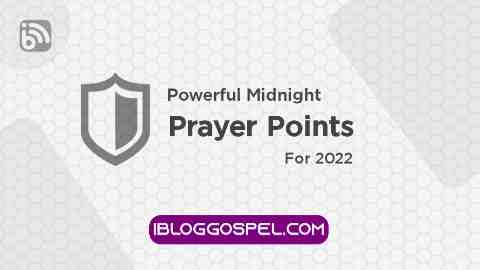 As we launch into 2022, a renewed wave of spiritual warfare is about to commence. It’s undoubtedly true that someone will need midnight prayers in this season.

One thing I’ve noticed is that, during such seasons, the enemy often works hard to make sure no one gets delivered out of his grip. The reason he does this is to keep people in bondage and ensure they are not successful throughout the year.

For this reason, the beginning of a new year is ofted the perfect time to clamp down and destroy the works of darkness. It’s better if we don’t even allow them to be successfully executed.

He that committeth sin is of the devil; for the devil sinneth from the beginning. For this purpose the Son of God was manifested, that he might destroy the works of the devil.

Our Lord Jesus Christ manifested so that He might destroy the works of the enemy. The same thing applies to us; we’re likewise called into spiritual warfare — as soldiers in the army of God. Because…

The virtually disappeared Chinese tennis star Peng Shuai made another awkward forced interview appearance during the Beijing Olympics.  Her appearance is a reminder of a list of well-known Chinese celebrities that have disappeared after crossing the Comminust Party.  None of them are bigger than China’s former version of Elon Musk, Jack Ma, who was last […]